Read about the newest updates in the community.

This blog post describes how to deploy a bare metal cluster, a virtual one for simplicity, using Metal³/metal3-dev-env. We will briefly discuss the steps involved in setting up the cluster as well as some of the customization available. If you want to know more about the architecture of Metal³, this blogpost can be helpful.

This post builds upon the detailed metal3-dev-env walkthrough blogpost which describes in detail the steps involved in the environment set up and management cluster configuration. Here we will use that environment to deploy a new Kubernetes cluster using Metal³.

Before we get started, there are a couple of requirements we are expecting to be fulfilled.

Overview of Config and Resource types

In this section we give a brief overview of the important config files and resources used as part of the bare metal cluster deployment. The following sub-sections show the config files and resources that are created and give a brief description about some of them. This will help you understand the technical details of the cluster deployment. You can also choose to skip this section, visit the next section about provisioning first and then revisit this. 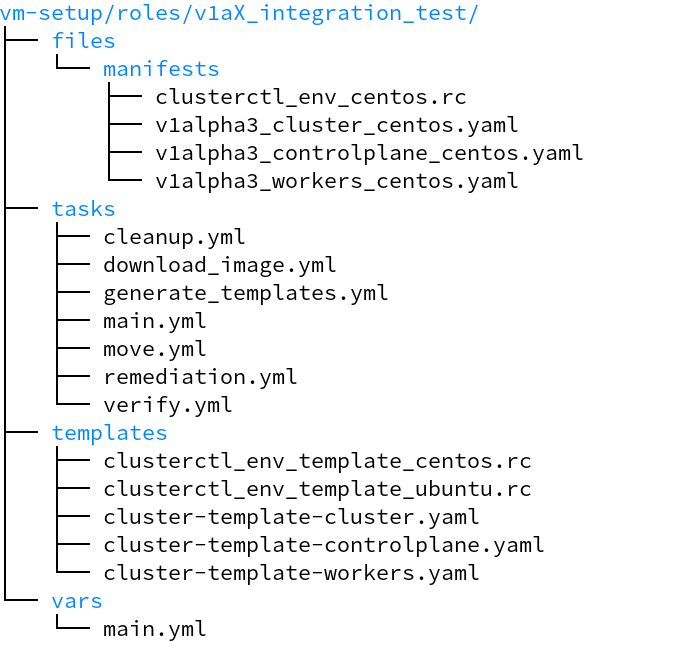 Among these the config files are rendered under the path https://github.com/metal3-io/metal3-dev-env/tree/master/vm-setup/roles/v1aX_integration_test/files as part of the provisioning process.

A description of some of the files part of provisioning a cluster, in a centos based environment :

Here are some of the resources that are created as part of provisioning :

The corresponding KubeadmConfig is copied to the control plane/worker at the time of provisioning.

All the scripts for cluster provisioning or deprovisioning are located at - ${metal3-dev-env}/scripts/. The scripts call a common playbook which handles all the tasks that are available.

The steps involved in the process are :

The manifest directory is created when provisioning is triggered for the first time and is subsequently used to store the config files that are rendered for deploying the bare metal cluster.

This script, located at the path - ${metal3-dev-env}/scripts/provision/cluster.sh, provisions the cluster by creating a Metal3Cluster and a Cluster resource.

To see if you have a successful Cluster resource creation( the cluster still doesn’t have a control plane or workers ), just do :

This script, located at the path - ${metal3-dev-env}/scripts/provision/controlplane.sh, provisions the control plane member of the cluster using the rendered definition of control plane explained in the Steps Involved section. The KubeadmControlPlane creates a Machine which picks up a BareMetalHost satisfying its requirements as the control plane node, and it is then provisioned by the Bare Metal Operator. A Metal3MachineTemplate resource is also created as part of the provisioning process.

It takes some time for the provisioning of the control plane, you can watch the process using some steps shared a bit later

To track the progress of provisioning, you can try the following:

The BareMetalHosts resource is created when Metal³/metal3-dev-env was deployed. It is a kubernetes resource that represents a bare metal Machine, with all its details and configuration, and is managed by the Bare Metal Operator. You can also use the short representation instead, i.e. bmh ( short for BareMetalHosts) in the command above.

You should see all the nodes that were created at the time of metal3 deployment, along with their current status as the provisioning progresses

All the bare metal hosts listed above were created when Metal³ was deployed in the detailed metal3-dev-env walkthrough blogpost.

Once the provisioning is finished, let’s get the host-ip :

baremetal is one of the 2 networks that were created at the time of Metal3 deployment, the other being “provisioning” which is used - as you have guessed - for provisioning the bare metal cluster. More details about networking setup in the metal3-dev-env environment are described in the - detailed metal3-dev-env walkthrough blogpost.

You can login to the control plane node if you want, and can check the deployment status using two methods.

The script is located at ${metal3-dev-env-path}/scripts/provision/worker.sh and it provisions a node to be added as a worker to the bare metal cluster. It selects one of the remaining nodes and provisions it and adds it to the bare metal cluster ( which only has a control plane node at this point ). The resources created for workers are - MachineDeployment which can be scaled up to add more workers to the cluster and MachineSet which then creates a Machine managing the node.

Similar to a control plane provisioning, a worker provisioning also takes some time, and you can watch the process using steps shared a bit later. This will also apply when you scale Up/Down workers at a later point in time.

To check the status we can follow steps similar to Controlplane case :

We can see the live status of the node being provisioned. As mentioned before bmh is short representation for BareMetalHosts.

This shows the status of Machines associated with workers, apart from the one for Controlplane, and we can watch the status of provisioning under PHASE

To get the nodes IP

To check if its added to the cluster

If you want to login to the node

We can add or remove workers to the cluster, we can scale up the MachineDeployment up or down, in this example we are adding 2 more worker nodes, making the total nodes = 3

All of the previous components have corresponding deprovisioning scripts which use config files, in the previously mentioned manifest directory, and use them to clean up worker, control plane and cluster.

This step will use the already generated cluster/control plane/worker definition file, and supply it to Kubernetes ansible module to remove/deprovision the resource. You can find it, under the Manifest directory, in the Snapshot shared at the beginning of this blogpost where we show the file structure.

For example if you wish to deprovision the cluster, you would do :

The following video demonstrates all the steps to provision and de-provision a Kubernetes cluster explained above.

In the first section we show the various configuration files, templates, resource types and their meanings.Then we see the common steps involved in the provisioning process. After that we see a general overview of how all resources are related and at what point are they created - provision cluster/control plane/worker.

Here are a few resources which you might find useful if you want to explore further, some of them have already been shared earlier.